The Nov 7 2020 test session is cancelled as there was no one preregistered and I didn’t hear of anyone that was interested. This is the last session for 2020.

Test sessions will be scheduled for 2021 with the first one in late February, so hopefully we will have a better year for testing.

If you have a question please contact Dave Johnson (N9EZW) at dlj301@gmail.com

I am sorry to say, we will be cancelling the May 2, 2020 Testing Session due to the Stay-At-Home order.

If other options become available, we will provide an update here.

The 2020 VE Test Schedule is under the Licensing Tab.

David Johnson (N9EZW) has taken over as coordinator of the VE Testing. He can be reached at dlj301@gmail.com.

Brian Murray (KB9BVN) has successfully started up and led the VE testing program for the past 5 years. Many Thanks to Brian!!

I just wanted to make a quick post to notify everyone that the last test session for 2018 will be cancelled.  There’s a scheduling conflict for Nov. 10th.  The one individual who is pre-registered will be notified, and anyone interested in testing is encouraged to visit the Indianapolis Radio Club test session at noon the same day.  Next years test schedule will resume in Feb.  Stay alert for 2019 dates.  73 to all.

Last Saturday (May 14, 2016) the WD9BSA VE team held our second licensing exam of the year.  We had ten people attend the test session at the Golden Burke Scout Center in Indianapolis, IN that morning.  Fortunately, we had nine VEs present to administer the tests and handle the other various duties required to pull off these events.  This is a pretty large group for us, but word is getting around that our exams are free through the Laurel ARC VEC.

A total of eleven exams were given with 100% passing rate.  Here are the results:

A CALL TO ARMS

Seems there has been much buzz lately in the Council regarding the WD9BSA station.  That’s an especially good thing when it’s of a positive nature.  There have been several requests made of the station regarding potential amateur radio exposure to Scouts and the public.

We’ve been offered a chance to setup a station at the Indiana State Fair this summer.  I know the Council has a display/presentation area there every year.  This would be an excellent PR opportunity for bringing the ham radio message to both Scouts and the public.  At this point I don’t know details of how many days we would be obligated to attend or how many hours each day.  This is an item definitely worth discussing among the members and other friends of the station.  Of chief importance would be having Scouts participating and operating there, not just adults.  I believe logistics would be another concern.  Many of us are still working full time jobs and may not have days off available then.  Scout volunteers would also need parents to transport them to the fairgrounds if they’re not driving yet.

A second request had been made to support two different BSA summer camps.  Another opportunity to show off the capabilities of amateur radio as a public service, emergency preparation tool, intro to technology, and a hobby.  Again, I can’t offer specifics regarding how many days we would be obligated to.  Same concerns as before, I would think.  Although this would probably be mostly adult presenters as the Scouts would actually be attending camps, etc.

So, give this some thought.  This info has also been posted over on the WD9BSA Facebook Group and there’s already been some suggestions and discussion.  I think this could be a real PR gift for the station, but we need all-in participation commitments to pull it off.

The WD9BSA VE Team finished up the year with a successful testing session last Saturday.  We had three test takers, two of which are Scouts.  Although we serve the community as a whole, it’s always nice to test Scouts since that’s the real reason we organized the team and chartered the WD9BSA radio station.

We were also able to perform an administrative address change for a local ham.

All in all we had a pretty good year, which would not have been possible without so many loyal VEs for the WD9BSA group. Thank you very much!

This is an open invitation to join the WD9BSA weekly Scout net.  Participation has been growing and is open to operators holding any license class.  Checkins begin at 7:30 PM local time Monday evenings.  Just tune your radio to the 443.000 MHz 70 cm repeater and set it for + offset and 100 Hz CTCSS tone.  The Scout net is a great place for new hams to learn net operation procedures and communicate with fellow Scouts.  Come say hello and make some new friends on the air!

Antenna Report!
Thanks to the great work crew Saturday, we finally got the Carolina Windom back up in the air. We may not be as high as we’d like, but that can be changed in the future if necessary.  We did a couple of transmissions with it and the SWR was very low and we were putting out a good signal.  We didn’t try to make any real contacts though. I’ll have the analyzer with me next time to really check it out.
With thanks to the WD9BSA work crew and those who came up to help with us. KB9BVN, Brian, Scout Noah (great climber), Scout Alex (also great climber, and NEW HAM, he passed his exams yesterday), KC9BRZ, Dave, (wicked wire weaver in the trees), K9RBH, Rick, (Jack of all trades), and N9CXI, Tom (JOAT, sling maker) and KC9TYJ Nathan (yet another JOAT)! Also the Camp Belzer Rangers and Staff, Kevin, and Dynamite Doug, and the loan of the ladder and general support for out efforts getting this big antenna back on the air!. Great Job guys, if I missed anyone, please let me know, I want to make sure we don’t leave anyone out!
Also check out our calendar of events for the rest of the year.  See the link below.  It’s PDF format and can easily be downloaded or printed out.
Schedule Flyer

This past weekend (Nov 8-9) we had the opportunity to bring Scout radio to many new people.  In order to accomplish this we had to split up the WD9BSA regulars.  The activities started Saturday morning.  Our VE team assembled to conduct the last scheduled licensing session for the year. They were pleased to report that Brian N9BSW successfully upgraded to Extra Class.  They also have plans to assist with licensing at the conclusion of  a couple upcoming Scout Technician Class license classes.  This has been a successful year for the VE team with 31 people attending our free testing sessions.  We presided over six test sessions and issued 33 element exams, of which 27 were passed.  22 of those tested were Scouts or leaders.  Many thanks to all those who’ve volunteered with this effort.

At the same time that the VE team was preparing for the test session we had an away team headed up to Cary Camp in Lafayette.  This camp is part of the Sagamore Council and was host to the Area 6 Venturing Crew conference.  There were Crew members there from all over Indiana and as far as Cincinnati, OH.  Think of this as a camporee for Venturing Crews.  We estimated there were at least 50 kids in attendance.  The first order of business was to erect a mast and prepare to check-in to the annual Simulated Emergency Test using the local ARES repeater.  Some of the kids helped Tom accomplish this task.  I was still driving at the time so I was able to check-in as mobile.

The Crews were all split up and to form three groups.  This allowed them to intermingle and make new friends as they competed in their activities–something different than what I’ve been used to at Boy Scout camporees.  The amateur radio demonstration station was one stop on their way through the various activities.  Tom provided several battery powered field stations to display and also had the mobile command unit (aka big red truck) to show off.  After lunch we raised a short windom-style antenna to make some HF contacts.  We had several adults and kids come back through to check that out, too.

We were able to get a lot of good feedback and information for the future Venturing Crew we hope to start.  Two boys expressed interest in joining it.  I think we hooked them when we put them on the air with a station in Venezuela!  We also made a few other stateside contacts but limited our contacts so as to save batteries for the whole day.  Our next order of business will be to have an open house where we can hopefully recruit enough kids to charter our own crew.  Wouldn’t it be great if we could be Crew 7373 or some such!

Our final activity was the monthly station open hours held on Sunday from 2-7 PM.  We hope that this can become a regular meeting time and location for the Crew.  Our next open hours will be held December 14.  The upcoming open house is still TBA.  We’re looking forward to finishing up an excellent 2014 at the station.  Be sure to spread the word anytime you can about the station.  Our success in 2015 will rely on it. 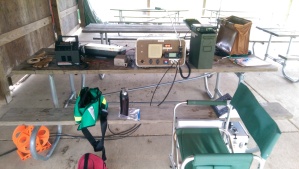