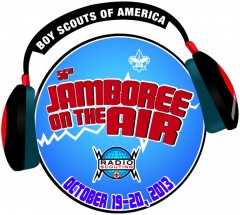 Dedicated to the memory of one the Crossroads of America Scout Council’s great Scouters and Amateur Radio Operators.

Bert C Johnson was born one year before the Boy Scouts of America was organized in 1910. When Bert reached his 12th birthday he joined Troop 36 at Tabernacle Presbyterian Church, 34th and Central, Indianapolis. His relationship with Troop 36 lasted nearly 28 years.

The one person who had the most lasting Scouting influence on Bert was F.O. “Chief” Belzer, the Indianapolis Council’s first Scout Executive. Chief Belzer was the driving force behind the dynamic growth in Scouting in the Indianapolis area. At Camp Chank-tun-un-gi (now Camp Belzer) is where Bert earned his Firecrafter rank in 1925, Minisino honor in 1928, and was dubbed a Weeping Willow in the Royal Order of High Barks, a group at camp that practiced all sorts of camp hijinks and provide comical entertainment at campfires.

He became a Scout in 1922, First Class by October 1923, and Eagle in 1926 and Double Eagle in 1927, having earned 42 merit badges. He maintained his involvement with Scouting while at Purdue, 1927-1931, Bert was an assistant scoutmaster with Troop 36 for a short time, 1931-34, Bert was a registered as an assistant scoutmaster with Troop 80. Bert returned to his old troop to take over as Scoutmaster in 1935, where remained until he was called to active duty with the Army in 1943.

He returned to Troop 36 in 1946 as Scoutmaster after being discharged. Here he remained until the troop dropped in 1850. Bert next turns up as Scoutmaster of Troop 173 in 1966. He his son, David, earns his Eagle award and Bert remained Scoutmaster until he and Ruth moved to Greenwood where he continued in Pathfinder District and as council member-at-large.

He was an Eagle Scout, a Firecrafter, a Minisino, Brotherhood member of the Order of the Arrow; he has earned the Scoutmaster’s Key and has been awarded the District Award of Merit and the Silver Beaver Award for outstanding service to youth.

The Scout Law is the foundation upon which the whole Scout movement rests. By committing himself to the Scout Oath the boy promises to live up to this law with its ideals of self-development and service to others. It is the fulfillment of this promise that makes a boy a true Scout.

Bert fulfilled that promise. Bert was a true Scout. We will miss him, especially, at Firecrafter and Eagle dinners when Bert would be the last to sit down after the parade of years. Yes, a Scouting icon has left us, Bert has gone home.

Today at the Crossroads of America Scout Council we have a new learning center at Camp Belzer, it replaces one that burned to the ground a few years ago and with the planing for this new center came an idea of including an amateur radio station to be used for the benefit of scouts from all over our council. A small group of hams who knew Bert, his son and one of his scouts joined in and started planning for the day the new center would be open, aiding in it’s design to make sure amateur radio features would be included in the design. And this year, 2012, during the Jamboree on the Air, an international scouting event, we are happy to announce the Grand Opening of the WD9BSA Bert C. Johnson Memorial Amateur Radio Station! You will find us at or near many of the JOTA frequencies calling CQ JOTA, call us! Our station includes two complete operating stations which both include HF and 2m rigs, we have had a third HF rig donated and another VHF/UHF rig as well, these may go into a roving go-kit that we will take to other council camps for demonstrations and other amateur radio activities. We are forming a Venture Crew at this time and will be asking them to help with expanding amateur radio activities through out our council. In the future we will be offering Merit Badge Classes for both Radio and Emergency Preparedness Merit Badges.

But we aren’t just for that, we can also have scouts of all ages participate and any scout unit from our council will be able to schedule with us. Tigers, Cubs, Boy Scouts and Venturers will also be welcome to come to our shack and complete their radio requirements for any of their advancement needs. Our Crew will also be making the station active during many amateur radio events like Field Day, JOTA, Simulated Emergency Test and even contests, depending on what they want to do. We may even put up a special event station in the future. The plans are endless. Some one even suggested an activity for the most creative/innovative/weird/hilarious method of launching an antenna over a tree! The slowest being, place wire antenna on the ground, plant tree under it, wait 20 years, and you are on the air! In the future the station will be available to Scout Amateur Radio operators from all over the Crossroads of America Council who have scheduled an operating time with the station Trustee, we may also have some regular operating schedules that would allow guest operators. All guest operators will need to bring us a copy of your FCC license to keep on file at the station.

QSO Information: We are listed with Logbook of the World and plan on having some cards made up in the very near future.

With many thanks to those who have helped build this station, those who donated equipment, Ten-Tec and the Boy Scouts of America, we are WD9BSA, and we hope to meet you on the air soon!